The Adventure of Innovation in Law: Part 6 LESSON 3: Above all else, be resilient

On any adventure there will be some days when you may be out on your own and wish you were anywhere but where you are.

There were times on my overland trip where I felt the challenge at hand was insurmountable. One day in particular out of the six months of traveling stands out. It was cold, snowing in fact, I was suffering from weeks of altitude sickness from camping above 4,700m (~15,500 ft), and although surrounded by people I felt utterly alone.

No surprises I felt exactly the same way about three months into implementing change at a #BigLaw firm. Except for the snow. Though at times it could be pretty icy!

I remember I was sitting at my desk, staring at a blinking cursor and a blank email that was supposed to contain an update of implementation ‘progress’. It wasn’t writer’s block. It was worse. There was no progress and nothing seemed to be working.

I was struggling to gain traction, going around in circles, no one knew who I was and everyone was simply too busy to engage. I was getting dragged down preaching to the ‘unconverted’ about the benefits of AI and technology, smarter sourcing, and Legal Project Management.

When I had those feelings of hopelessness overlanding, I was somewhere in the middle of China, miles from an airport, let alone an intentional one; I couldn’t escape even if I wanted to. I wanted to call it quits. In the office, I also wanted to quit the innovation implementation. However, I had accepted the challenge, and made a commitment to delivering what I had set out to – also no escape.

I had no easy out, no escape in either adventure. All I could do was dig a little deeper and carry on.

Keep Calm and Carry On 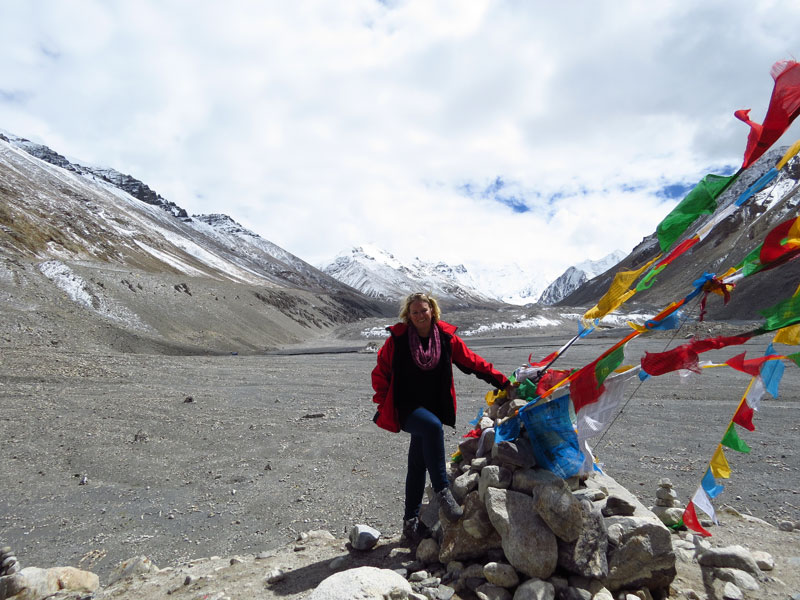 On top of the world – almost (Mount Everest North Base Camp, Tibet, China)

The morning after I wanted to quit the overland trip I woke still feeling deflated, desperately wanting the comfort of a warm five star hotel, and a toilet…that you could sit on. I remember struggling to breathe as I packed up my tent (for the 11ty-millionth time) and pulled myself back on the truck not knowing what the day would bring.

What I didn’t know that morning was today would be the day I reached Everest base camp – the north one in Tibet at some 5,200m elevation. As I stood on top of the rock mound, surrounded by the colourful Tibetan prayer flags, the clouds cleared, and I was rewarded with a view of the world’s highest peak. In the flesh (or is it or stone?), right there in front of me. Rewarding me for all the pain and hardship it had taken to get there.

With that experience forever etched in my mind, when I recognised the same feelings while implementing change in the office, I took the same approach: I dug deep, and kept calm and carried on.

I stopped trying to do what everyone else was doing and did something else entirely. I put myself in shoes of the client. If I was a client, what would I want from my law firm. Then, I actually talked to clients (gasp! I know, right?).

Following several discussions with different clients, I developed a one page magazine style client dashboard report. Where clients could, at a glance, see everything about their specific matter:  financials, status, evolution. Suddenly legal project management was a visual, tangible and useful thing – for the client, and subsequently the lawyers.

Being resilient is one of the key personality traits you’ll need to get through any change management project. It’s tough. Sometimes it’s really tough. However, focusing on your strengths can mean the difference between success and failure.

Don’t give up, be resilient – success awaits you… Read Part 7: Don’t give up, success is just around the corner